This article contains depictions or discussion of the following:

I was four years old when the Americans with Disabilities Act came into effect. Thanks to the tireless efforts of advocates and protesters, the bill passed and helped give people with disabilities the opportunities and protections they needed to succeed in an able-bodied world. 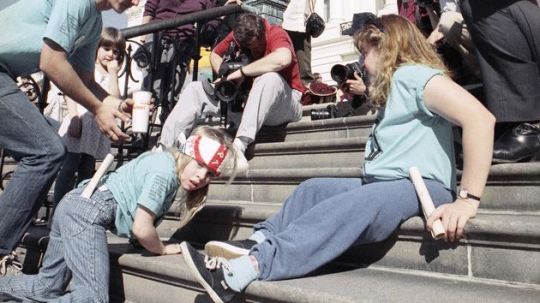 Despite the bill’s passage, the fight for equality was only just beginning. Classrooms, bathrooms, and boardrooms weren’t going to be made wheelchair accessible overnight and it would take a lot of courtroom battles to bring people in line with the new legislation. Some schools would even go out of their way to avoid complying with the law.

I went to one of those schools.

Second grade was a rough year for me. I was the only disabled kid in the entire school district (that didn’t need to be a part of the SPED program) and my second‐grade teacher would do whatever she could to exclude me from the classroom. Lucky for her, I was an easy target.

I didn’t handle stress well as a kid. If I became confused or felt pressured, I would quickly be reduced to tears. Because of my weak posture, I sat in a pediatric therapy chair that I had to be strapped into in order to sit properly.

When I would start to become upset, my teacher would simply drag me into the hallway, chair and all and leave me their (where everyone in the school could see me) until I’d calmed down. I can’t tell you how many hours of my second‐grade life were spent strapped to a chair and sobbing in a hallway.

The following year, my entire school went on a field trip. Because of the number of kids on the trip, we were being bused to the larger middle school for lunch. I remember getting on the short bus and following the rest of the buses towards the middle school only to have my bus suddenly turn off and start heading back towards the elementary school. I asked the bus driver what was going on and he informed me that, because the middle school where my classmates were eating at wasn’t wheelchair accessible (the lunch room was on the second floor and there was no elevator), I was being taken back to the elementary school to eat lunch… by myself.

So, there I was sitting at a table in the main area of the school, my lunch brought to me as if I was some kind of criminal being kept in isolation. I cried as I ate my tater tots.

Hearing my sobs, one of the teachers at the school comes over to me and tells me that this whole situation is my fault because I didn’t bring my crutches for the field trip (they had actually broken that morning). Not that I could have safely walked up the stairs with them anyway.

We had to sue this school to put bars in a bathroom stall so I could use it. We sued them to until they built a new school. They put the playground atop a hill and built the school at the bottom.

That year we moved to a different town.

This is the way things were before the law truly took effect.

Today, I almost take accessibility for granted. Finding a place without curb cuts or an accessible bathroom is more the exception than the rule. Twenty‐five years of progress sure has made things better.

However, there’s still more that needs to be done. Things are not as equal as they could be and we need to stay vigilant to make sure what we have isn’t taken away.